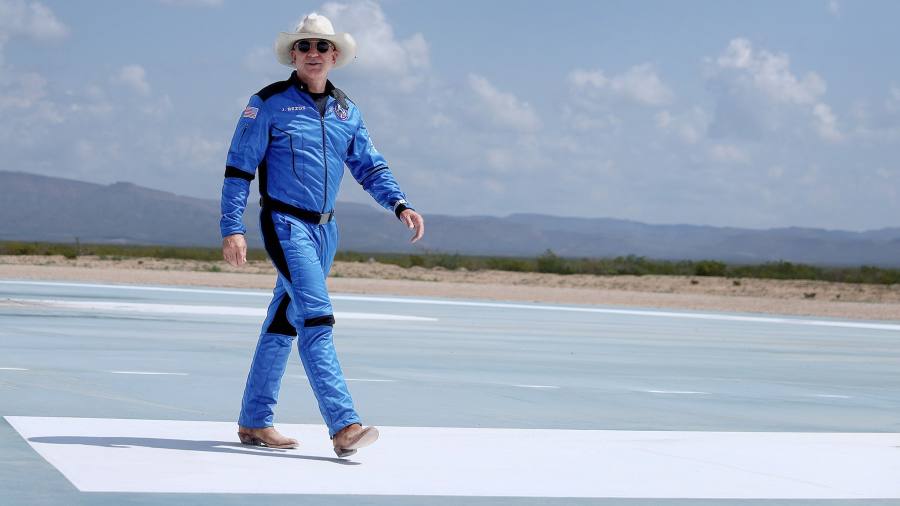 It is an uncontroversial, but nonetheless interesting, fact that the richest man in the world is a terrible dresser. Good clothes and style consultants can be bought for quite a bit less than, say, a yacht so enormous that a historic bridge must be dismantled so it can be put to sea. But Jeff Bezos, with more treasure than Scrooge McDuck, looks like hell. What gives?

That is not to say that, for your modern multibillionaire, the problem of clothes is easy to solve. For most of us – the late André Leon Talley aside – a key aspect of dressing well is looking good while not drawing too much attention to just how good you look. But if you have a billion dollars, everyone has all their attention pointed directly at you, all day long. Sprezzatura is not an option.

This is why many of the super-rich default to simple uniforms: Elon Musk’s inoffensive dark-suit-white shirt combo, for example. Warren Buffett gets it. He manages to make Zegna suits look like they came from Sears, and you can be damn sure that is part of the I’m-just-capitalism’s-sweet-old-grandpa schtick he carefully honed while making enough money to buy Switzerland without financing .

Look back a couple of decades and he looks gentle, geeky and natural

Bezos does not want to be anyone’s sweet old anything, and he is not content with a uniform. This was most evident last summer, when he went in for a little space tourism aboard a giant flying dildo. The bright blue flight suit was not enough. He also wore a conspicuously beat-up cowboy hat and boots (whose job it was to put the patina of wear on these items is not recorded). Style writers slammed on the brakes, rubbernecks at a particularly gruesome car crash. The New York Times’ Jacob Bernstein coined the term “a Bezos” for any middle-aged man who has stumbled deep into “dentist with a Lamborghini” territory. In GQ, Eileen Cartter found the get-up less pathetic than menacing, lending a “general air of out-of-touch villainy.”

There are elements of truth in both interpretations, but I do not think they quite solve the riddle (the pundits also failed to note the watch worn over the cuff of the flight suit, which may have been an astronaut thing, but came off as a foul parody of Gianni Agnelli). It may help to look back a decade or two, to when Bezos went in for pleated trousers and baggy sportcoats, and had not traded in the fuzz around the perimeter of his bald head for a full shave. In pictures of this earlier incarnation, he looks gentle, geeky and natural.

Something went wrong thereafter. One problem is that he got in shape, and decided that his clothing should make much of his muscles, starting with snug fitting. This has it backwards. As Daniel Craig demonstrated conclusively in his James Bond films, muscles and tight fits are an awful combination. The combination radiates discomfort; all those poor, strained seams.

It’s a shame, because other than the cut, Bezos’ taste in suits is pretty good. He chooses attractive, textured cloth. There are photos of him in a classic, shawl-collared tuxedo looking almost dashing.

The problem is his desire to make his business clothes stand out, when he should be running the other way. Enormous tie knots are a specialty. He also goes in for the tragic jeans-and-blazer combination which, on rich and the poor alike, shoots for informal and hits try-hard.

The problem gets worse on casual Friday (doesn’t it always?). There is the notorious picture of Bezos in Sun Valley a few years ago, wearing a black waistcoat over a biceps-emphasizing black polo short, along with aviator glasses – a sort of action-hero get-up (Terminator: The Dorkening).

It’s a bit unfair to make fun of Bezos’ outfit from New Year’s Eve 2021: white Brunello Cucinelli jeans and a tight, shiny shirt patterned, apparently, on the tile floor of a particularly louche Moroccan hotel. His heart-shaped sunglasses make it clear that this is basically fancy dress. He’s having some dumb fun.

And that’s just it. Bezos is a recently divorced nerd with a ton of money. Does not he have a right to dress the part? Where’s the harm?

At the risk of getting serious in a basically trivial context, I think there may, in fact, be some harm. Bezos is not just any rich guy. He controls a company that touches every part of American life. He employs 1.6mn people. There is something about Bezos’ goofy, slightly crass style that just clashes with the massive role his choices plays in so many lives. Once again, in unexpected ways, clothes turn out to matter.

Robert Armstrong is the FT’s US financial editor