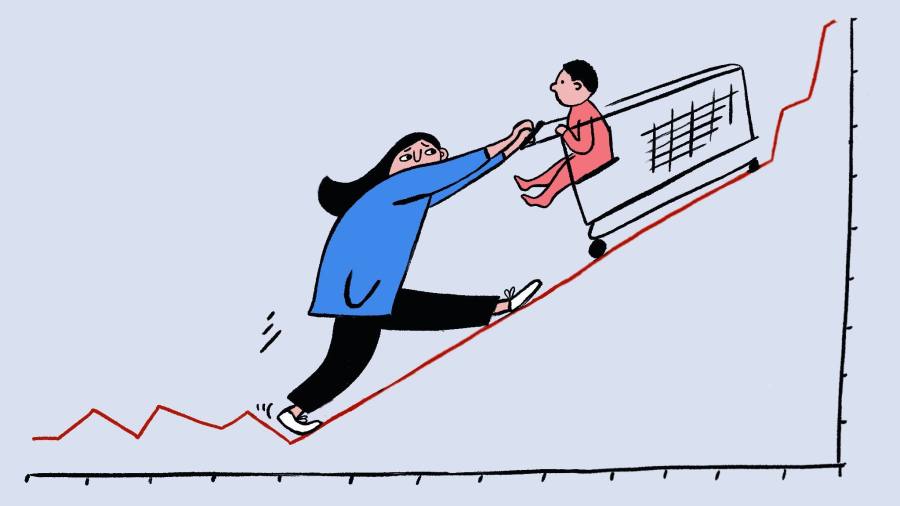 What color is a rainbow? On average, white. And what is the current level of UK inflation? On average, 5.4 per cent. Both answers are true. Both are missing something important.

The consumer price index, or CPI, aims to measure the average price paid by UK consumers. But when the latest CPI numbers came out, the food writer and poverty campaigner Jack Monroe took to Twitter with some examples from her local supermarket: 500g of cheap pasta up from 29p to 70p year on year; 1kg rice up from 45p to £ 2; baked beans up from 22p to 32p. As the examples piled up, Monroe concluded that the inflation rate faced by poor households was much higher than the CPI’s 5.4 per cent.

“The system by which we measure the impact of inflation is fundamentally flawed,” she added – in a thread that has since been read by millions of people. I agree, for different reasons. Monroe is worried that prices are soaring for the poorest households. I’m worried that our current inflation-measuring process simply can not tell us if she is right or wrong.

Instead, we have to rely on clues. One clue comes from looking at a reweighted CPI. The FT’s Chris Giles did this. He pointed out that while energy prices were rising fast, so were the prices of treats such as restaurant meals. Reweight the CPI to reflect the spending of a poorer household (more food and heating) or a richer household (more eating out and flights) and the inflation rate is much the same for everyone.

Another clue comes from industry watchers. Retail analyst Steve Dresser notes that Jack Monroe’s data came from Asda, but “Asda have been cutting value tier products for a while. . . it’s not indicative of the wider market. ”

A third clue comes from a large survey of consumer spending recently published by academic economists in the US. They conclude that the inflation spike in late 2020 was higher for “low income, low education and Black households”. However, the difference is half a percentage point or less.

But we should not have to rely on clues. Reweighting the CPI cannot show us what is happening to the super-cheap food products that are so important to someone shopping on a tight budget. Indeed, the head of inflation at the Office for National Statistics, Mike Hardie, tells me that the ONS data gatherers target the most popular products, based on shelf space. Are these products the cheapest staples or not? “We have not done the analysis to know,” Hardie acknowledges.

I have some sympathy. It makes sense to calculate inflation by looking at the same goods, month after month. But a savvy budget shopper might first head to the “reduced to clear” section. Then they might pick up some cheap carbohydrates. Rice one week, spaghetti the next – whatever was on special offer. What is the inflation rate for such a shopper? Even in theory, the answer is elusive.

Nevertheless, the answer matters. It may not matter to the Bank of England as it tries to ensure price stability across the entire economy, but it should matter to the government as it sets the level of benefits and the state pension. And it certainly matters to a desperate parent at the checkout, trying to figure out if they can afford a jar of peanut butter or whether the toast will be dry this week.

Jack Monroe – who tells me that her “key interests are maths and cheap pasta” – is now pulling together a voluntary effort to produce a price index of cheap food staples and other basics such as menstrual products, toothpaste and shampoo.

But that cannot compete with the resources that the Office for National Statistics devotes to compiling the CPI, collecting 6,000 price quotations a day across the country. The ONS has just announced plans to beef up this effort with scanner data from supermarkets.

Is this statistical firepower well aimed? Yes, if the aim is to measure inflation across the economy. No, if we want to understand what is happening to the poorest households.

It is both expensive and invaluable to gather really good data. But it is often shocking to realize that there are certain questions that have slipped between the cracks. In 2007, we were stunned to realize how much we did not know about risk in the banking sector. In 2019, Caroline Criado Perez’s Invisible Women made a compelling case that data relevant to women were often neglected. In 2020, the ONS was quick to set up an infection survey representative of the population, but such a survey could have been established years before. Now Jack Monroe has pointed to another gap.

Nerds and bean-counters everywhere – my kind of people – need to try to fill such gaps in our knowledge rather than stumble into them. There are white rainbows everywhere, and it is not always easy to pick out the colors. But we must try.