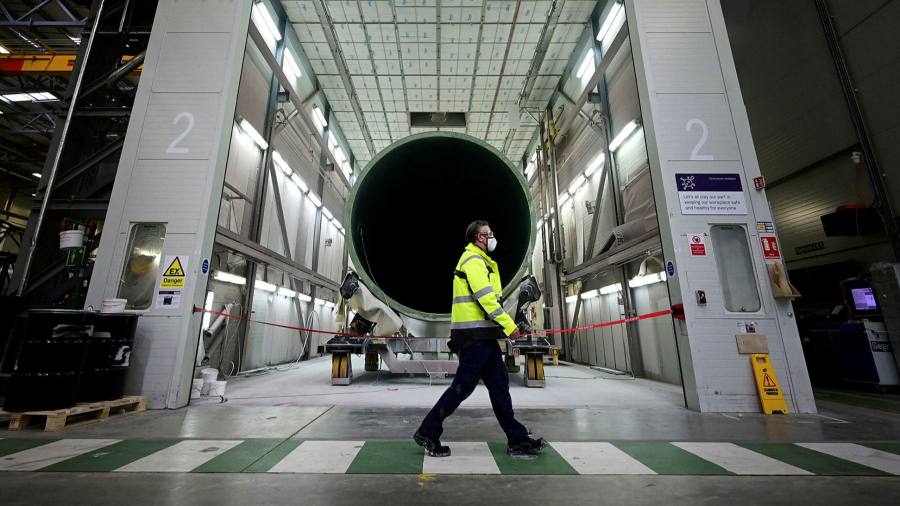 European wind groups were among the “green rush” darlings of the early pandemic, when global emissions pledges stoked a surge in clean energy stocks just as the crude price crash crushed oil groups.

Now they have been blown badly off-course as supply chain disruption and soaring raw material costs prompt a stark reversal of fortunes.

Over the past year more than $ 58bn has been wiped from the market value of the region’s three biggest wind companies – turbine makers Vestas and Siemens Gamesa, and offshore developer Orsted.

Turbine makers have suffered “easily the worst year for profitability for the last 15 or 20 years”, said Sean McLoughlin, head of industrial research at HSBC. “A lot of things that could have gone wrong have gone wrong.”

Manufacturers of turbines are particularly vulnerable to supply chain problems and surging freight costs. When components fail to arrive, assembly is delayed, setting back the construction of entire wind projects and triggering financial penalties.

“We have components where delivery times have been increased from five weeks to nearly 50 weeks,” Andreas Nauen, Siemens Gamesa chief executive, said this month, a day after the company announced it was replacing him following its latest profit warning. He said that his company had been hit by a “perfect storm” of problems.

Logistics in the sector are complex at the best of times. A single wind turbine can weigh more than 100 tonnes, containing steel, copper and rare earths in thousands of highly engineered components that are manufactured all over the world.

“Wind turbines have really heavy material use,” Mads Nipper, Orsted chief executive, told the Financial Times. “We are talking hundreds and hundreds of tons of material” in each turbine in which prices had surged.

Ben Backwell, chief executive of the Global Wind Energy Council, said a sixfold surge in freight costs since the start of 2020 and price rises of 50 per cent for steel and 60 per cent for copper, had “significant impacts on production costs”.

The resulting surge in the cost of wind turbines has reversed years of steady price declines.

“Historically, this was an industry where costs were always falling, because technology has gotten better and better,” said Deepa Venkateswaran, utilities analyst at Bernstein. “No one thought there would be a time when prices would rise. Obviously this has been a rude shock. ”

Wind turbine prices in the second half of last year were 9 per cent higher than in the previous six months, lifting them back to levels last seen in 2015, according to Sanjeet Sanghera, head of wind at energy research group BNEF.

Turbine makers now find themselves caught between contracts signed years ago and goods that must be delivered today. Prices in the sector are negotiated years in advance, making it hard for manufacturers to pass on price rises to customers.

“If you were selling Moleskine books or Lego bricks, you can pass on that additional cost in a price increase next week to your customers,” said Nipper, a former Lego executive. “Whereas many of the turbines that we, for example, would have bought. . . we locked those prices a long time ago. ”

While the supply chain crisis has not hit Orsted as hard as the turbine makers, the company has faced a different problem: unusually low wind speeds that last year wiped DKr2bn ($ 305mn) from revenues.

Backwell believes that global climate goals could be jeopardized if the right policies are not put in place to support the sector.

“What really is difficult to bite off, is that you go to COP26 and everyone loves the wind industry, and everyone backs the energy transition. And yet some of the leading companies in the sector are finding it incredibly hard to make any money out of it, ”said Backwell. “The whole market signal is very dysfunctional.”

The rising turbine prices are forcing some turbine makers and developers to renegotiate contracted projects, leading to delays or postponements.

New contract designs shift more of the logistics risk on to the customer – for example by offering logistics on a “cost plus” basis.

“There’s a fundamental change that needs to be driven in this industry. Who takes on what risks ?, ”said Nauen. “[For many years] we took on a lot of risk with regards to cost inflation, transport risk and many other things. And I do not think that this can continue. ”

More comprehensive hedging strategies are also being adopted, although this only works up to a point – there is no way to hedge for supply chain disruption.

“You can sit with the world’s most effective price hedge, but if you do not get the component or the raw material on time, or at the site, where you actually want it” it does not help, said Henrik Andersen, Vestas chief executive.

“Many of the things you can do by hedging is a price-risk hedging, but it does not cover the underlying fundamental physical delivery,” he added. “And that is actually more than half of the problem right now.”

While long-term demand for wind turbines is set to be boosted by net zero emissions targets that now cover most of the global economy, the near-term outlook is not so rosy.

Total wind installations are forecast to dip slightly this year and next, partly because of the end of subsidies for wind power in the US and in China.

While European turbine makers have been battered, the situation in China, the world’s biggest installer of wind turbines last year, has been quite different.

This is partly because of a price war among China’s turbine makers and partly down to lower steel costs in the country. Chinese manufacturers also seem to be faring better financially than their western counterparts – large turbine makers such as Goldwind and Zhejiang Windey are still profitable.

But even though European wind companies are struggling, many analysts see light at the end of the tunnel.

Rising turbine prices are allowing the higher costs of materials and logistics to be passed on to the customer. And with so many net zero targets in place, long-term demand for wind turbines is still set to grow.

“I’m hoping that 2022 is like a bottom,” said Venkateswaran. “And the industry will come out stronger at the other end.”