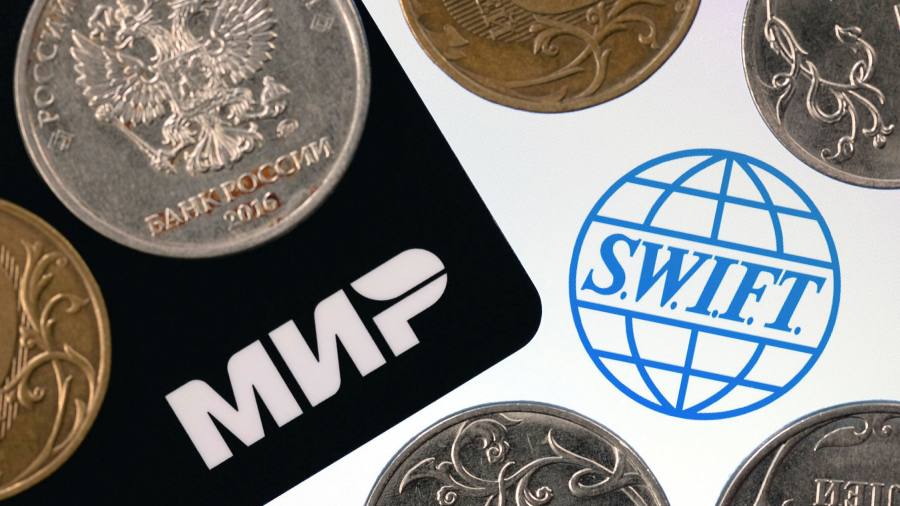 Joe Biden imposed a raft of economic sanctions on Russian banks and oligarchs on Thursday as he promised to make Vladimir Putin pay dearly for invading Ukraine. But even with Russian troops bearing down on Kyiv, the package was missing the one punishment that many analysts regard as the most severe: ejecting Russia from the Swift international payments system.

“The sanctions. . . on all their banks have equal consequences, maybe more consequences than Swift, ”Biden said, defending the package. “It is always an option, but right now that’s not the position that the rest of Europe wishes to take.”

Western leaders are split on whether Russia should be removed from Swift, a move that would deliver a heavy blow to the country’s banks and its ability to trade beyond its borders.

In a G7 call on Thursday, British Prime Minister Boris Johnson pushed “very hard” to remove Russia, according to officials, but he later admitted to MPs that it was “vital that we have unity” on the issue among western allies.

Canadian Prime Minister Justin Trudeau also backed removing Russia from Swift, according to a G7 official. One senior US official said Biden did not make any comment on the issue during the G7 meeting.

But earlier on Thursday German Chancellor Olaf Scholz warned that his country had reservations about such a dramatic move and so did the EU, according to officials close to sanctions negotiations. A German official declined to comment, saying only that “all options are still on the table”.

Another G7 official said some members were reluctant because it would make it impossible to pay for Russian energy, which could indirectly cause rises in international energy prices. That is an acute concern in Washington, where Biden has said he does not want sanctions to raise petrol prices and hurt consumers.

Some G7 members also fear that removing Russia from Swift would accelerate efforts by it and China to create rival payment systems that did not use the US dollar.

As he announced the latest US sanctions on Thursday, Biden insisted they would still have a detrimental impact on the Russian economy.

Those measures target a range of individuals and entities, including two banks, Sberbank and VTB. The Biden administration also imposed export control restrictions that will hurt the ability of Russian companies in the defense, aerospace and maritime sectors to obtain American technology.

Biden also threatened that he would consider sanctioning Russian President Vladimir Putin, personally, and that the Swift option remained on the table.

Putin’s aggression against Ukraine will end up costing Russia dearly, economically and strategically. We will make sure that Putin will be a pariah on the international stage, ”he said.

But Ukraine had been pushing for even stronger action. Dmytro Kuleba, Ukraine’s Minister of Foreign Affairs, tweeted: “Everyone who now doubts whether Russia should be banned from Swift has to understand that the blood of innocent Ukrainian men, women and children will be on their hands too.”

Swift, a Belgian co-operative, is used by more than 11,000 banks and financial institutions worldwide and handles 42mn messages a day, facilitating trillions of dollars worth of transactions. Russia accounted for 1.5 per cent of transactions in 2020.

“Swift is a neutral global co-operative set up and operated for the collective benefit of its community of more than 11,000 institutions in 200 countries,” the group said in a statement. “Any decision to impose sanctions on countries or individual entities remains solely with the competent government bodies and applicable legislators.”

Being cut off from Swift would not prevent Russian banks from carrying out cross-border transactions, but doing so would become more costly and arduous. Foreign dealings would rely on the use of less-efficient communication tools, such as email and telex.

It would also stymie Russia’s ability to recoup international profits from its oil and gas exports, which account for more than 40 per cent of its revenue.

Johnson has faced criticism at home for imposing what critics called “peashooter” sanctions. He is now trying to push western colleagues to deploy very tough reprisals, which one G7 official said was an easy position to take because he knew that there was not enough support.

Johnson’s spokesperson said Britain would “work with allies to shut off access to the Swift payment system”.

EU leaders will convene on Thursday evening in Brussels to discuss the bloc’s sanctions package. While Baltic countries and Poland are among those which are advocating a hawkish line on Swift, other member states are more wary.

Swift has long been considered as an option within the EU sanctions package, but it was not seen as a likely part of any early round of measures, and was instead held in reserve for extra deterrence. But the scale of Russia’s invasion of Ukraine has prompted a debate about whether to accelerate its use.

Milos Zeman, president of the Czech Republic, on Thursday said he wanted to impose tougher EU sanctions on Russia, including ejecting its banks from Swift, arguing it was important to isolate Putin.