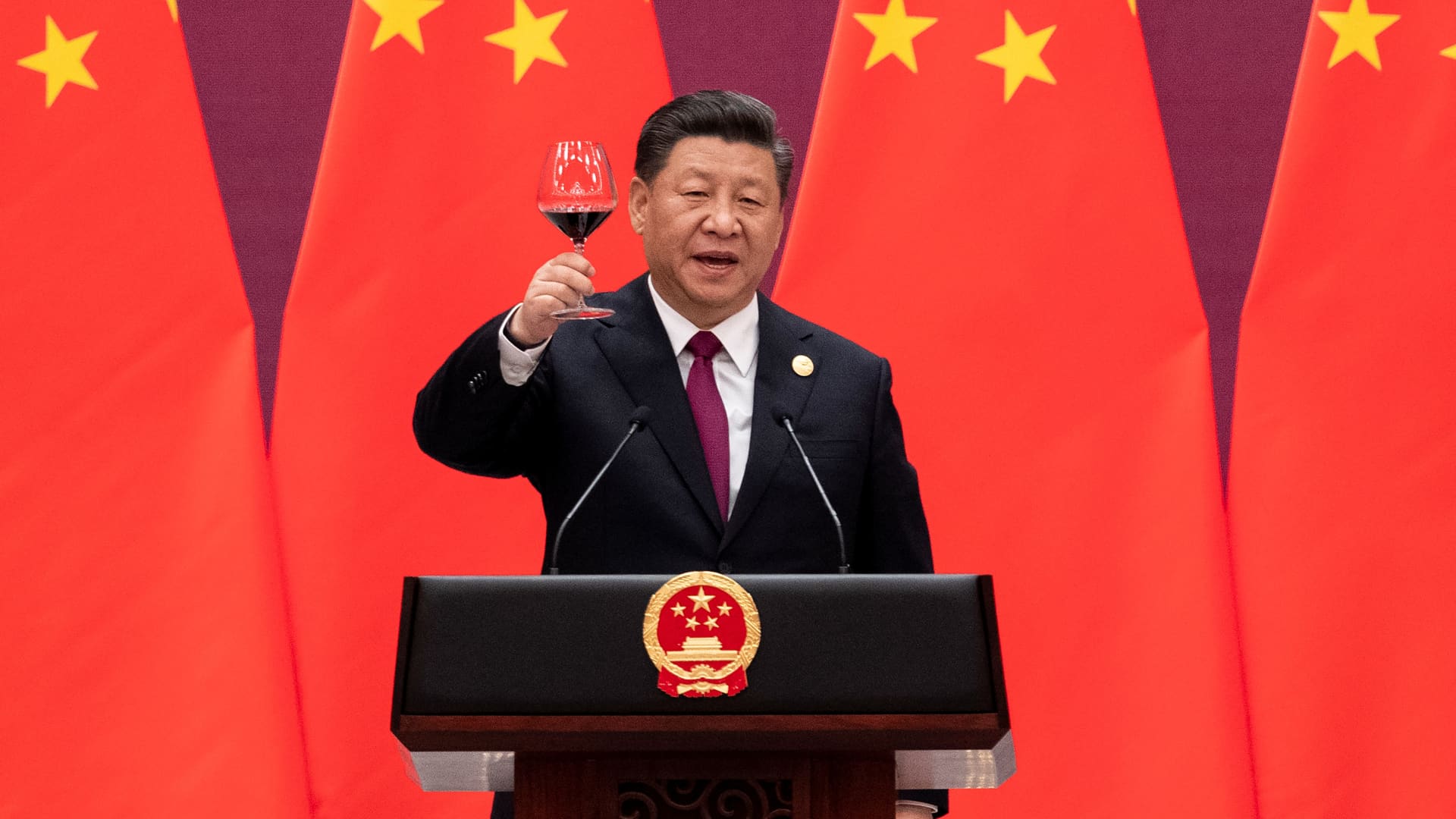 Chinese President Xi Jinping proposing a toast at the welcome banquet for leaders attending the Belt and Road Forum at the Great Hall of the People on April 26, 2019 in Beijing, China.

Xi Jinping once declared China should “prioritize innovation” and be on the “cutting-edge (of) frontier technologies, modern engineering technologies, and disruptive technologies.”

Since that speech in 2017, Beijing has spoken about technologies it wants to boost its prowess in, ranging from artificial intelligence to 5G technology and semiconductors.

Five years since Xi’s address at the Communist Party of China’s last National Congress, the global reality for the world’s second-largest economy has transformed. It comes amid an ongoing trade war with the US, challenges from Covid and a change in political direction at home that have hurt some of Beijing’s goals.

On Sunday, the 20th National Congress — held once every five years — will begin in Beijing. The high-level meeting is expected to pave the way for Xi to carry on as head of the Communist Party for an unprecedented third five-year term.

Xi will take stock of China’s achievements in science and technology, which have yielded mixed results.

“I agree it is a mixed bag,” Charles Mok, visiting scholar at the Global Digital Policy Incubator at Stanford University. 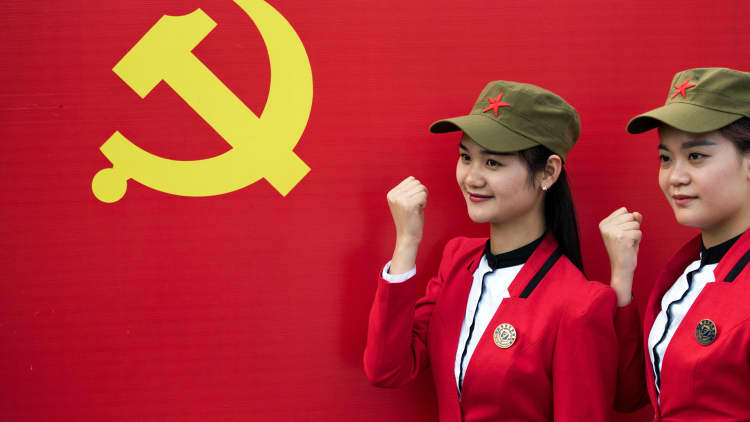 He said China sets “lofty” goals as it aims to be the best, but “they are limited politically and ideologically in terms of the strategies to reach them.”

Private tech enterprises are faltering under stricter regulation and a slowing economy. China is far from self-sufficient in semiconductors, a task made harder by recent US export controls. Censorship on the mainland has tightened as well.

But China has made some notable advances in areas such as 5G and space travel.

“It would seem that Xi underestimated the challenges China faced in overcoming its reliance on foreign, mostly US firms…”

Beijing put a lot of focus on self-sufficiency in various areas of technology, but especially on semiconductors. The drive to boost China’s domestic chip industry was given further impetus as the trade war began.

In its five-year development plan, the 14th of its kind, Beijing said it would make “science and technology self-reliance and self-improvement a strategic pillar for national development.”

One area it hoped to do so was in semiconductors.

But a number of restrictions by the US have put a dent in those ambitions.

“It would seem that Xi underestimated the challenges China faced in overcoming its reliance on foreign, mostly US firms, in key ‘core’ or ‘hard’ technologies such as semiconductors,” Paul Triolo, the technology policy lead at consulting firm Albright Stonebridge, told CNBC.

“He also did not account for growing US concern over semiconductors as foundational to key technologies.”

Looking ahead, the latest package of US controls will make a huge dent in China’s technology ambitions.

Things did not look as “bleak” for China’s semiconductors in 2017 as they do now, Triolo said.

“Looking back, Xi should have redoubled efforts to bolster China’s domestic semiconductor manufacturing equipment sector, but even there, a heavy reliance on inputs such as semiconductors has made it difficult for Chinese firms to reproduce all elements of those complex supply chains.”

The Biden administration unveiled a slew of restrictions last week that aim to cut China off from key chips and manufacturing tools to make those semiconductors. Washington is looking to choke off the supply of chips for critical technology areas like artificial intelligence and supercomputing.

That’s because part of the rules also require certain foreign-made chips that use American tools and software in the design and manufacturing process, to obtain a license before being exported to China.

Chipmakers — like Taiwanese company TSMC, the most advanced semiconductor manufacturer in the world—are also dependent on US technology. That means any Chinese company relying on TSMC may be cut off from the supply of chips.

Meanwhile, China does not have any domestic equivalent of TSMC. China’s leading chip manufacturer, SMIC, is still generations behind TSMC in its technology. And with the latest US restrictions, it could make it difficult for SMIC to catch up.

So China is still a long way from self-sufficiency in semiconductors, even though Beijing is focusing heavily on it.

“Looking ahead, the latest package of US controls will make a huge dent in China’s technology ambitions, because the curbs on advances semiconductors,” Triolo said. The curbs will “ripple across multiple associated sectors, and make it impossible for Chinese firms to compete in some areas, such as high performance computers, and AI related applications such as autonomous vehicles, that rely on hardware advances to make progress.”

A major hallmark of Xi’s last five years is how he has transformed China into one of the strictest regulatory regimes globally for technology.

Over the last two years, China’s once free-wheeling and fast-growing tech giants have come under heavy scrutiny.

It began in November 2020 when the $34.5 billion initial public offering of Ant Group, which would have been the biggest in the world, was pulled by regulators.

That sparked several months where regulators moved swiftly to introduce a slew of regulations in areas from antitrust to data protection.

In one of the first regulations of its kind globally, Beijing also passed a law which regulated how tech firms can use recommendation algorithms, underscoring the intense tightening that took place.

Looking back to Xi’s 2017 speech, there were hints that regulation was coming.

“We will provide more and better online content and put in place a system for integrated internet management to ensure a clean cyberspace,” Xi said at that time.

But the pace at which regulations were passed and the scope of the rules took investors off guard, and billions were wiped off the share prices of China’s biggest tech companies — including Alibaba and Tencent — in 2021 and 2022. They have yet to recover from those unloaded.

Analysts pointed out that even though there were mentions about cleaning up the internet, the swift nature of regulation that subsequently swept across China was unlikely to have been anticipated — even by Xi himself.

“While I believe that in 2017, Xi had absolutely become focused on strengthening platform regulation, I very much doubt that the rapid-fire nature of… [the regulation] was pre-planned,” Kendra Schaefer, partner at Trivium China consultancy, told CNBC.

Five years ago, Xi said the government would “do away with regulations and practices that impede the development of a unified market and fair competition, support the growth of private businesses, and stimulate the vitality of various market entities.”

This is another pledge that appears not to have been met. China’s technology giants are also posting their slowest growth in history, partly due to tighter regulations. Part of the story, analysts say, is about Xi exerting more control over powerful technology businesses that were perceived as a threat to the ruling Communist Party of China.

“It is obvious that they are not supporting the growth of private businesses,” Mok said. “In my view, they have not succeeded.”

China’s successes from 5G to space

Despite the challenges, China has found success in the realm of science and technology since 2017. Space exploration has been a key focus.

In 2020, a Chinese moon mission concluded with its spacecraft returning back to Earth with lunar samples, a first for the country. That same year, China completed its own satellite navigation system called Beidou, a rival to the US-government owned Global Positioning System (GPS).

Last year, China landed an un-crewed spacecraft on Mars and is planning its first crewed mission to the Red Planet in 2033.

China was also one of the leading nations globally to roll out next-generation 5G mobile networks, which promise super-fast speeds and the ability to support new industries like autonomous driving.

In electric vehicles, China has also pushed ahead. The country is the largest electric car market in the world and home to CATL, the world’s largest EV battery maker, which is looking to expand overseas.

The regulatory assault on the domestic technology sector, which has slowed in recent months, will not go away entirely.

Even if regulatory actions are “moving into a new phase” in Xi’s third term, companies like Alibaba and Tencent won’t necessarily see the breakneck growth speeds they’ve seen in the past, Mok said.

“Even if they find their feet, it is not the same ground. They won’t see that growth, because if China’s overall GDP and economy growth is like what people are talking about now for the next several years … then why should do they even outperform the whole China market?” Mok said.

Without a doubt, technology will continue to be a key focus for Xi over the coming five years, with a focus on self-sufficiency. China will likely continue to strive for success in areas Beijing deems as “frontier” technologies such as artificial intelligence and chips.

But Xi’s job in tech is now that much harder.

“As the US continues to ratchet up controls in other areas of technology, and squeeze technology investments in China via outbound investment reviews, the overall innovation engine in China, heretofore driven by the private sector, will also begin to sputter, and the government will have to increasingly step in with funding,” Triolo said.

“This is not necessarily a recipe for success, except for manufacturing heavy sectors, but not for advanced semiconductors, software, and AI.”

China is no longer just any emerging market