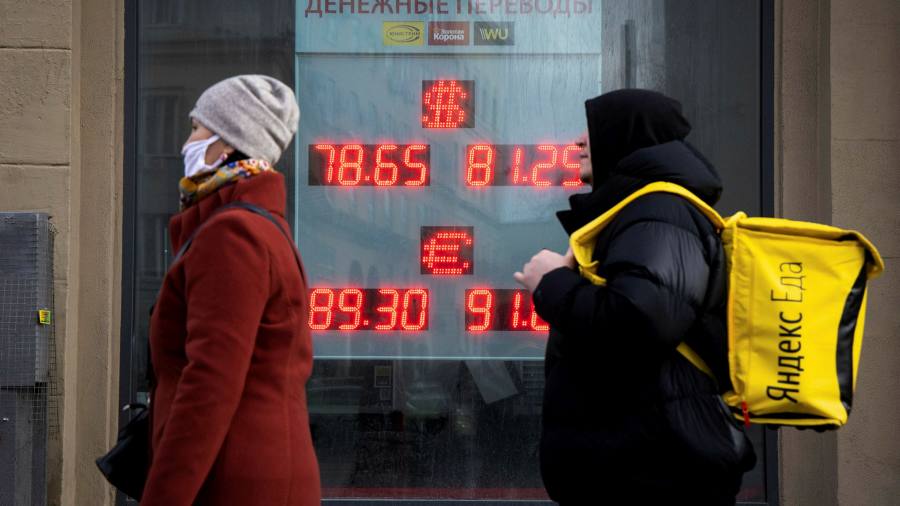 Yandex, the company often referred to as “Russia’s Google”, has become increasingly isolated as Western investors and key partners abandon it in the wake of Vladimir Putin’s war in Ukraine.

More than 75 per cent of the company’s value has been wiped off in the past six months, while plummeting dramatically as Russian forces began their attacks last week. Trading in the company’s shares was halted on Monday because of volatility.

Widely seen as one of the jewels in the Russian tech scene, Yandex has gained a strong position in its home country while also showing ambition to grow abroad, from offering internet services in Germany and Turkey, to creating research and development offices in Silicon Valley and beyond.

In recent days, western tech groups with close ties to Yandex, such as ride-hailing service Uber, food-delivery group Grubhub and search engine DuckDuckGo, made moves to end partnerships with the Moscow-based company.

“We’re all stunned at what happened,” a senior figure at Yandex told the Financial Times. “None of us expected that Russia would go to war. The sanctions are coming in fast and hard, and the impact it’s having on our ability to operate is really challenging. ”

While there are no specific Western sanctions targeting Yandex or its executives, the person said that over time the knock-on effects would mean the company would not be able to function properly. “There will come a point where we can not get the technology needed to grow our business,” the person said.

The rush by Western corporate groups to decouple their operations from Russia has shattered prospects that Yandex could become a significant player on the global tech stage, observers said.

The company said plans to offer cloud computing services to EU clients, including a $ 30mn investment in Germany that had been due to become operational this year, had “temporarily” been put “on hold”.

“They will now be a ‘Russian’ company – a company of an aggressor, no longer a Russian miracle,” said a Russian academic who requested anonymity over fear of repercussions from the Kremlin.

“I would not say [Yandex] lost an opportunity forever, but shared projects with other countries, buying promising international start-ups – that’s not gonna happen any time soon. ”

Founded in 1997, Yandex has spent years cultivating an image that it was far enough removed from the Kremlin to be considered a secure investment.

It began trading on the New York’s Nasdaq exchange in May 2011 and at its peak last November, the company had a market cap in excess of $ 30bn, compared to less than $ 7bn today.

On Monday, Uber announced it would remove three of its executives from the board of Yandex.Taxi, a rideshare joint venture the companies entered into in 2017.

Uber said it was looking to “accelerate” the sale of its 29 percent stake, having previously stated it would sell it over the course of two years, because of “recent events”.

A deal which allows Yandex to use Uber’s brand in Russia and a number of other markets was still in place, however, and would run until 2030 if a call option to buy the US group’s remaining stake was exercised.

Food delivery service Grubhub, which in August last year announced a deal with Yandex to provide autonomous robots for carrying food orders across US college campuses, told the FT it would be ending its partnership that has put about 100 robots on the streets.

“We’re working with our campus partners on alternate service options as we shift away from Yandex over time,” a Grubhub spokesperson said.

During a congressional hearing on Tuesday, the US-based privacy-centric search engine DuckDuckGo said it had stopped using Yandex to provide non-news links on its search engine in Russia and Turkey.

“In light of Russia’s assault on democracy in Ukraine, we have paused our relationship with Yandex,” said Katie McInnis, DuckDuckGo’s head of US policy.

A Yandex spokesperson declined to comment on moves from third parties regarding the use of its services, and that company would not offer an assessment on the future of its domestic and international businesses. In addition, the status of a self-driving car pilot in Michigan was unclear at the time of publication.

“Right now, this is not about business,” a Yandex spokesperson said.

We are protecting and providing services that tens of millions of people living in Russia need, such as electricity, running water, and a functioning internet.

Taxis need to be able to reach their destinations, and groceries need to be delivered. Infrastructure needs to function. Our primary goal is to ensure continued access to and operation of those services. ”

The company has yet to make a public statement on the war, though its executive director Tigran Khudaverdyan wrote on Facebook, in response to staff comments, that the situation was “unbearable” and “monstrous”.

The crumbling stock price and value of the ruble meant many in the company’s 18,000 strong workforce, who receive a large amount of compensation via equity, were in a state of near “panic”, said the senior figure at the company.

“I consider the company’s actions a crime and complicity in war and murders and I do not want to be a part of it,” wrote Ruslan Musaev, a Yandex project manger, announcing his resignation with a post in Russian on Facebook.

Musaev was one of several Yandex workers publicly denouncing their employer, with a focus on the selection of news items the Yandex algorithms give prominence to on its most-trafficked pages.

Lev Gershenzon, a former head of news at Yandex, told the FT that while Yandex was not a state broadcaster, its news filters were amplifying a Kremlin-sanctioned message to tens of millions of people each day, giving an inaccurate picture of the reality in Ukraine.

In a Facebook post, Gershenzon wrote to his former colleagues: “It’s not too late to stop being accomplices to a terrible crime. If you can not do anything – quit. ”