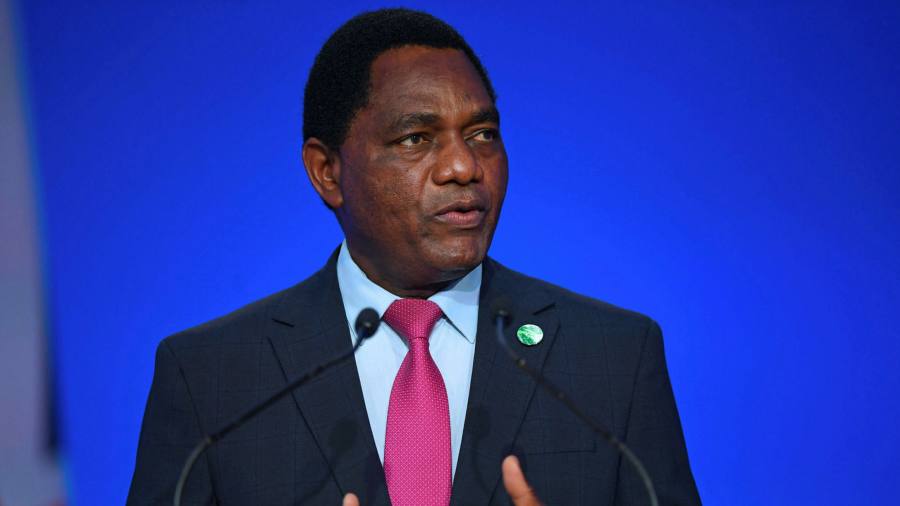 Zambia’s president has promised not to favor Chinese creditors over western bondholders as he seeks a resolution to the southern African nation’s debt crisis.

Zambia’s debt woes triggered the continent’s first pandemic-era sovereign default in 2020; Lusaka is in the process of restructuring about $ 15bn of external debts in order to secure a $ 1.4bn IMF loan. Talks with creditors are due to take place in the coming weeks.

The restructuring is seen as a test case for whether China will accept losses from a surge in loans to Africa in the past decade. Annual Chinese lending to Africa peaked at just below $ 30bn in 2016.

“We want to resolve the debt situation – it has to be resolved,” Hakainde Hichilema said in an interview with the Financial Times. “It’s good for Zambia, it’s good for creditors, because in the situation we were in when we took office, it was a no-win situation. No one was benefiting. ”

Last month, the head of the Paris Club group of wealthy creditor nations warned that China’s increasingly dominant role as a lender to poor countries deterred many from seeking debt relief.

About $ 6bn of Zambia’s debt is owed to Chinese creditors who helped finance a spending splurge that ended in crisis under Edgar Lungu, Hichilema’s predecessor.

“What we do not intend to do is to cross-subsidize – one debt stock holder paying a higher price, if you want to put it that way, or having better terms and another having worse terms,” ​​Hichilema said. “One creditor being of Chinese origin or another origin is not much of the issue here. It’s to make sure we get out of the problem. ”

Hichilema won an election landslide against Lungu last year but has said he had inherited a near-empty treasury after years of corruption. His government in December secured a deal in principle with the IMF that it hopes will anchor talks with creditors.

Zambia’s $ 3bn dollar bonds have been in default since it skipped interest payments in 2020. Chinese creditors agreed to freeze interest payments on their loans even as international bondholders refused to agree to a suspension.

But private investors wonder if their Chinese counterparts will take actual losses on their debts – or enforce their claims using what analysts have said are often unusually strict contract clauses.

Zambia needs to squeeze as much relief as it can out of creditors because the IMF bailout is likely to impose tough targets on finances at the same time as the government is promising to protect spending on social services. This year’s budget aims to reduce the deficit from 10 per cent to 6.7 per cent of GDP, and to deliver surpluses in the years after.

Hichilema has also pledged to recover assets allegedly looted under the previous government, but progress has been slow. “You will see progress very soon and we are already making progress,” he said.

Lungu has denied any wrongdoing.

Hichilema’s government is yet to repeal cyber security and public order laws that were used to repress the opposition under his predecessor. They would be looked at in parliament soon, he said.

But Hichilema said that compared to the crackdown under Lungu, civil society’s freedom to criticize him was “good – it’s not a bad thing”. He added: “We have created those opportunities [for criticism] which were not there just six months ago. ”