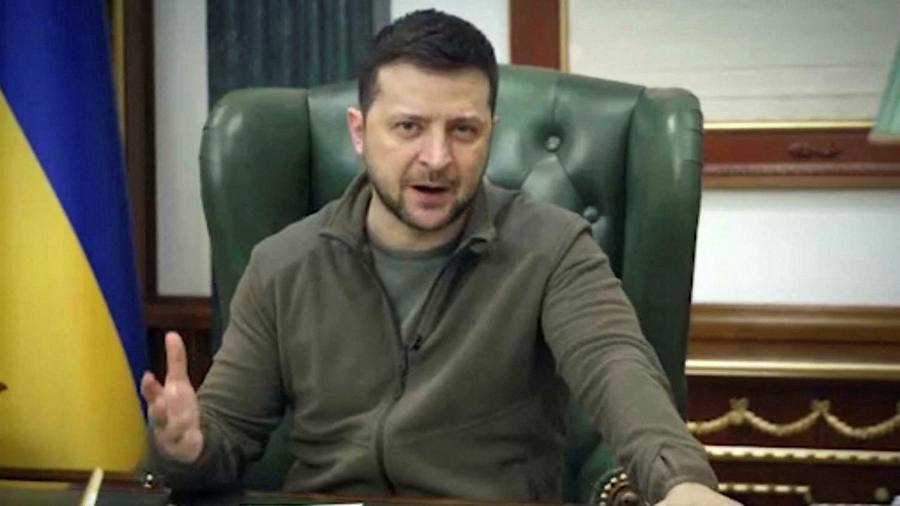 Ukraine’s leader expressed tentative hope on Monday about a diplomatic push for a ceasefire even as Russian forces continued to shell his country’s cities overnight, leaving hundreds of thousands of civilians trapped in siege conditions.

Diplomats remain skeptical about a breakthrough to end a war that has laid waste to Ukrainian cities, brought down devastating sanctions on Russia, and shaken world markets. But officials close to the talks reported tentative progress over the weekend, including on limited political issues relating to a potential settlement.

“Every day, in a video format, representatives of our countries’ delegations speak,” Zelensky said in a video address posted after 1.30am. “Our mission is clear: to do everything we can to ensure a meeting of the two presidents. The meeting that I am sure people are waiting for. ”

Zelensky said, however, that Ukraine would need “guarantees” on issues including humanitarian corridors for besieged cities. The Ukrainian president said that more than 130,000 people had been “saved” via evacuations over six days, but many more remain trapped in embattled cities such as Mariupol.

Since Putin launched his invasion on February 24, Russia’s forces have failed to assert control of Ukraine’s skies, and are struggling to marshall offensives to envelop the country’s biggest cities.

But relentless artillery and missile assaults have turned some of Ukraine’s frontline towns and cities into rubble, while hundreds of thousands of civilians are trapped in siege conditions, without access to food, water or electricity.

With the war in its third week, there were signs of movement on Sunday in talks between the Russian and Ukrainian sides, amid indications that Russia’s advance on the capital Kyiv and toward the third-largest city Odesa in the south was progressing slowly.

Mykhailo Polodnyak, an adviser to Zelensky, this weekend said Russian negotiators were “no longer making ultimatums, but are listening carefully to our proposals”. Meanwhile one of the Russian negotiators, Leonid Slutsky, head of the Duma’s committee on international affairs, noted the “substantial progress” made could be consolidated into documents soon.

A person close to the talks told the Financial Times there had been “movement” over the weekend that could allow Russia and Ukraine to reach agreement on Kyiv’s “demilitarization” and future neutrality.

Moscow’s other demands – particularly that Ukraine recognizes Russia’s 2014 annexation of Crimea and the independence of two separatist-held territories in the eastern Donbas region – looked “unreal”, the person said, but added that “the situation changes every day”.

The diplomatic efforts continued against the backdrop of a raging war, with Russia continuing its aerial assault on urban areas, including an early morning missile strike in Kyiv’s Obolon district. Several buildings in Stavische in the central Zhytomyr region were also attacked overnight, according to Ukrainian authorities.

Ukraine’s military said on Monday that it had executed “crushing strikes” on Russian military infrastructure including field bases and warehouses in order to disrupt its logistics.

After making little territorial progress for days, Kyiv said that the Russian troops appeared to be concentrating on regrouping, consolidating and resupplying frontline positions.

Ukrainian military claims cannot be independently verified. According to US officials, Russia has asked China for military equipment to support its invasion of Ukraine, where its troops’ advance has been repelled by Ukrainian defenses around the capital Kyiv, and along the southern coast on the approach toward Odesa.

Despite ongoing talks and repeated pleas from western leaders, there were few signs of progress in reaching agreement on humanitarian corridors to take residents out of areas surrounded by Russian troops.

On Sunday, the International Committee of the Red Cross warned that a “worst-case scenario” awaited hundreds of thousands of residents of Mariupol, the besieged port city that has been without power, water or other basic services for nearly two weeks, unless the warring parties could “reach a concrete humanitarian agreement urgently”.

A UN official co-ordinating the organization’s emergency response to the war said that the disruptions to transport, shipping, farming, logistics, and other sectors by the war had hit more than a quarter of Ukraine’s population.

“We assess there are about 12mn people affected by the economic standstill, due to the war,” Amin Awad, assistant secretary-general serving as crisis co-ordinator for Ukraine, told the FT.